Chile for the Coeliac

I was interested to see what gluten-free travel would be like in Chile and here are my tips for the 100% GF traveller to avoid gluten, gluten contamination and stay well.

The Chilean society for gluten intolerance is called Convivir, Fundacion de Intolerancia al Gluten. Use the translate button on your web browser and you will be able to use most of this website. Even without translation the point of sale’’ puntos de ventas’’ section under ‘Links des Interes’ gives a list of shops in Santiago and regional towns where gluten free products can be purchased, in addition to the large supermarkets. A few restaurants are also listed in the relevant section.

Gluten-free breakfast choices include fruit, yoghurt, sliced cheese and egg dishes usually. If you like gluten-free cereal or toast you need to bring your own. Gluten-free street food options are rare as most are wheat -based-  empanadas, sandwiches or even the popular wheat and peach drink! Taking my own lunch and snacks with me each day meant I did not have to search for something to eat. These shopping tips below will help.

Stock up on gluten free alternatives in the larger cities. Look for the ‘’Sin Gluten’’ or ‘’ Libre de Gluten’’ signage/logo on the packaging. Like Australia some of these items are in the health food section along with the sugar-free ‘’Sin Azucar’’ ranges which are not gluten-free so don’t be picking them up by accident. Other items are in the particular aisles such as bread ,cereals or biscuits depending on the shop so look around. Obviously, rice is available in every town but items such as rice cakes, rice/quinoa cakes/corn cakes or gluten free breakfast cereal choices I did not find outside the large cities. 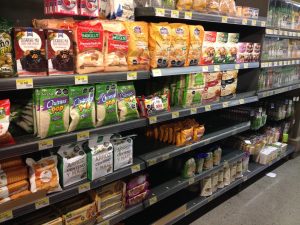 In Santiago I cruised the range of large supermarkets – Lider, Jumbo and Unimark and found that each had slightly different products available. I have attached a range of photos to show you what I found. These were in the Express de Lider on Merced in the fancy area of Bellas Artes(sjown above).

I also downloaded the Convivir list of GF foods (lista de alimentos) and wrote down a few brands to look for in each of the product areas I was interested in before I headed out. Although this list is in Spanish it is easy to translate the food group headings and go from there.

Avoiding contamination: – only buy products with the ingredients clearly listed and a statement advising allergen contamination potential. It will read something like this in Spanish where a range of allergens are listed such as gluten/frutos secos(nuts)/ leche(milk)/ soya(soy)/ sulfitos(sulphites)/sesame(sesame)/mani(peanut) etc. The ingredient list showing GF ingredients  is essential and an allergen contamination statement. The allergen statement will indicate the likelihood of gluten contamination on the production line so study these well and avoid those with the gluten containing grains or gluten listed, see the examples at the end of this article.

I found, after checking several supermarkets in Santiago, the following products that I stocked up on. 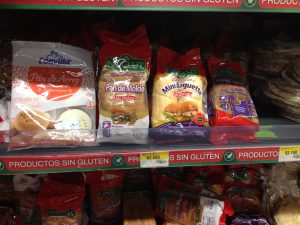 GF Snack foods:- some muesli bars/ sweet and savoury biscuits/ and nuts(Lider home brand at Lider supermarkets have an allergen statement that does not include gluten but all other nut/dried fruit brands I saw did, see the photo). I enjoyed some excellent GF vegetable chips by Bika which include beetroot, sweet potato and potato. 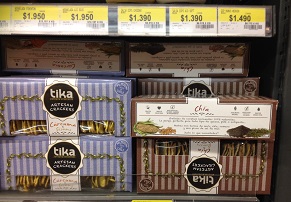 Yoghurt- Colun, Fundi and Loncoleche for example display the Sin Gluten logo and were widely available

Some lactose free yoghurt and milk products are available for the lactose and gluten intolerant individual as well and say Sin Lactosa on them in addition to Sin Gluten. 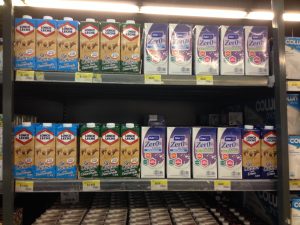 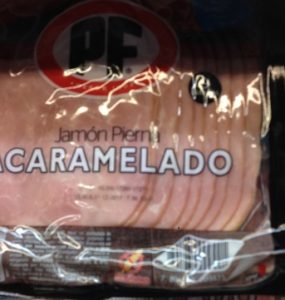 Spreads: Being a big peanut butter fan I found this was only available at a couple of large Santiago supermarkets as it was probably provided for expats as it is not eaten commonly by Chileans.

GF Beer: I found this in the Lider Express supermarket in Belles Artes. 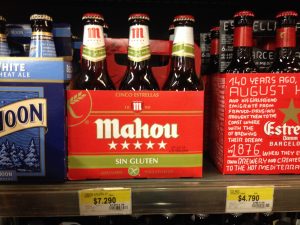 Breakfast:I found that most places I stayed included breakfast in the rate but were without gluten free cereals or bread so I took my own. The fresh fruits, egg and cheese choices were great options and with breakfasts if you are lactose tolerant the milk is usually hot so the quinoa flakes/puffed amaranth I carry with me made a tasty porridge and provided fibre as well.

Snacks: fresh fruit, avocado(palta) or cheese/ham/peanut butter and rice cakes, yoghurt. Some GF muesli bars or biscuits from your stocks.

Lunch: I carried rice/corn/quinoa cakes/crackers and tuna/tomato/avocado/cheese/GF ham and fruit to have for lunch in a little picnic pack that I was grateful I had added to my travel packing. Fresh juices were also often available at street stalls.

Dinners: I used a mixture of restaurant eating and self-catering.

At restaurants there is always rice/potatoes and grilled meats/fish/chicken on the menu so as long as you can communicate the need for items to have been prepared with minimum additions, I kept it to oil and salt in a clean pan, then you will have avoided contamination. The salads available are very plain usually- iceberg lettuce and tomatoes and maybe onion. The dressing choices of oil and vinegar are usually on the table.

Self catering- this was the easiest option I found as fresh ingredients are plentiful and cheap at markets so you can cook GF as normal for a fraction of the price.

Getting your request across in restaurants

I used very simple statements like those shown below at restaurants. I had them written down and they explained 1) the condition and 2) the dish that suits me.

This says: I have Coeliac disease and I have to avoid all wheat, rye , oats and barley and the products of these, even small amounts.

This says: Please could I have some natural vegetables or salad in a clean pot with nothing more added and meat/chicken/fish cooked in a clean frying pan with just a little oil and nothing else, thank you very much

You can use translating software to make your own sentence to describe what you would like.

Example food labels – carry your Spanish to English dictionary with you to shop!

Here is a Lider supermarket home brand product declaring gluten and other allergens as ingredients and also that it is made on equipment that processes soy.

Here is a label indicating the product is free of gluten as an ingredient and it was processed on equipment handling nuts(frutos secos), soy and sulphites

Enjoy your trip to this amazing country and stay well.